As we have understood the method of crashing in the video, let us move to the special case of Crashing. (If you have not watched the video yet, click on the "Watch Video" button above and clear your doubts about the method now.)

As title suggest, we will discuss the numerical which will have more than 1 critical path, i.e. Multiple Critical Paths.

Many may get confused in crashing of such problem which have more than 1 critical paths, as if you try to solve that you may find that:

So now, what's the solution to that?
Here is the very simple and logical solution to the same problem. We will understand now that, what we should do to tackle such problem!

Let us start by considering the following problem:

Table below shows the normal time & cost and crash time & cost of the various activities in a project. Find the optimum duration and minimum project cost, assuming the indirect cost of the project as Rs. 200/week.

As per the look of the numerical, it looks simple to solve, and believe me, it is if you follow this simple method.

If you don't know about Critical Path method (CPM), then check out - CPM Video. 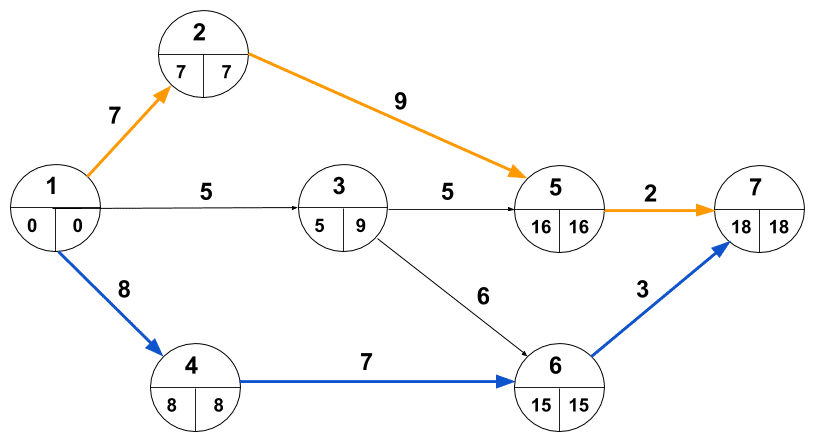 AS we can see from the netwrok diagram, we have more than one critical path generated, i.e. here we have two critical paths as marked in orange and blue colour, as follows:

As we can see above, both paths have same completion duration and the longest one as well, so both are critical paths. Such equal critical paths are called as Parallel Critical Paths.

Now,
Let us move to crashing of this numerical;

In examination you can only copy acivites in the first column and add second column for the cost slope. For better understanding, we are providing whole table again with the addition of the last column of cost slope. Same type examination tactics are always illustrating in videos provided by Education Lessons.

As you can see, cost slopes for different activities are evaluated in the table. Also, critical path activities are marked with their path colours (i.e. Orange and Blue).

We are avoiding re-writing of the table to save time in examination. Always try to complete such lengthy numerical in a single table.

So, crashing activity 1-2 directly by 4 weeks.
But wait, think once, if we try to do so, what will be result ?

We will find that, the project completion time will remain the same. This is happening because we have another parallel critical path.

Here, I mentioned that we are going to reduce the completion time upto 3 weeks, because if we take the difference of normal & crash time of activity 1-2 is (7-4) = 3.

Instead of that, if try to crash this activity by step-by-step crashing, then also same problem persists.

So, I can conclude logically that:

Okay, so we have solution to problem now. And, also we are going to do the same now.

We have two following critical paths:

Similarly, we have to find out minimum cost slope for path 1-4-6-7, as we are going to crash both paths together (parallel crashing).

Now, let us mark this the table as follows: 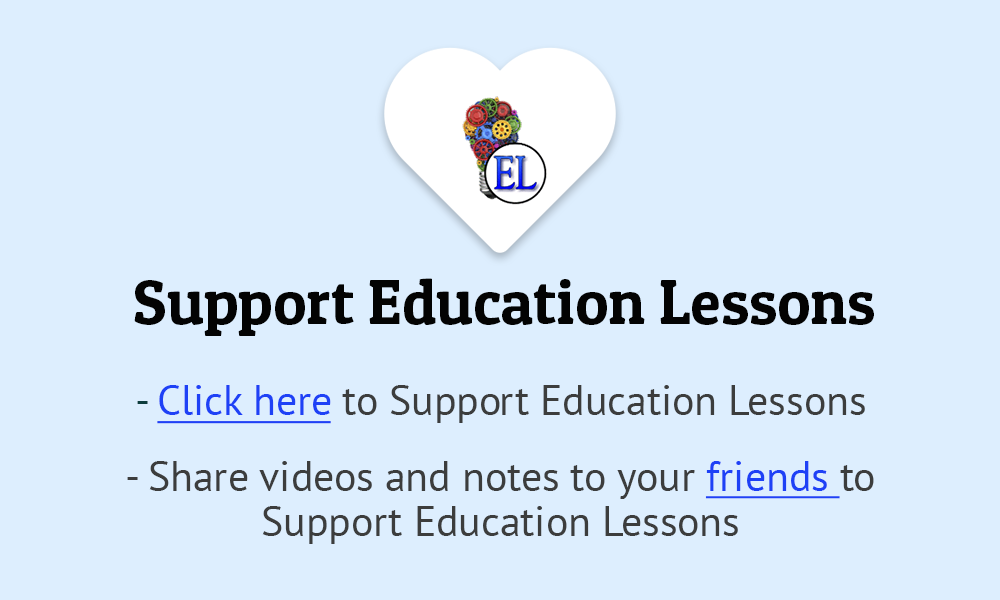 You have to use the last table we created, and mark in that only. I am copying again so that you can understand here only, without scrolling above.

As you can see, I have use "#" mark to mark this minimum cost slopes. Let us now crash this both paths simultaneously.

So now, question is what crash time we are gonna use, 4 or 5 weeks ?

Let me explain this:

We understand this using step-by-step crashing. If we crash both paths by 1 week, then we will find that 1 week is reduced in project duration.

As we know, the number days/weeks we are gonna crash, same will be the reduction in the total project duration.

Again, we can crash both paths by 1 week. But now, question arises - Upto how many times we can crash an activity, using step-by-step crashing ? What is the limit ?

Answer to these questions is: As I mentioned in step-by-step crashing, you can crash an activity by steps upto provided crash time.

For example, here we have:

As you can see, it is very lengthy to follow step-by-step crashing in examination. So, we should go for the direct method as illustrated in the Crashing video, but with a simple trick.

We will add a additional column to our existing table as follows:

Crashing limit: As we have understand from the concept of step-by-step crashing, we can reduce the duration of a particular acitivity upto given crash time, using crashing. So, the difference of Normal time and Crash time is the crash limit for a particular acitvity. i.e;

As you can see, crashing limit is already added for the required acitivities. We get;

So, we will go with the minimum limit, so that both the paths will have same reduction in the duration.

As you can see in the following table, I have added vertical bars "|" equal to crashing limit in the last column.
This is because, we have crashed activity based on minimum crashing limit (i.e 2), but we can still take the advantage of 1 week crashing of 1-2 with minimum cost of 50 in the next iteration. 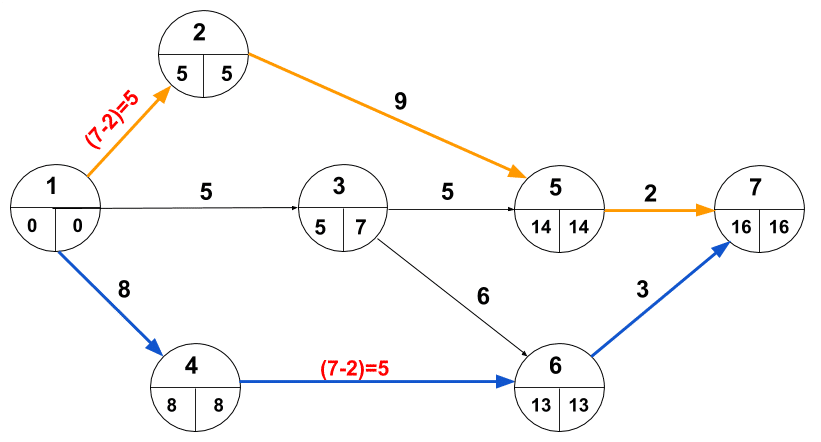 As we can see in the above diagram, both activites are crashed for 2 weeks. And, the project completion time is also reduced by 2 weeks, i.e. 16 weeks.

Here, we added cost of reduction by 2 weeks for both activities, because if we crash single activity we cannot reduce the total time of the project.

Let us move to next step of crashing the same way.

Always take advantage of minimum cost slope, and crash the activity upto the limit to get minimum cost of the project.

As you can see, I have strike out the number of bars from crashing limit against 1-2 & 4-6. Strike number of weeks you have already crashed, i.e. 2 strikes for both activities.

Now, for this next iteration while we are selecting minimum cost for both paths, I will select as following:

Selecting crashing by 1 week, as it minimum crashing limit among 1-2 & 1-4.
Also, marking "##" for the second iteration of parallel crashing. 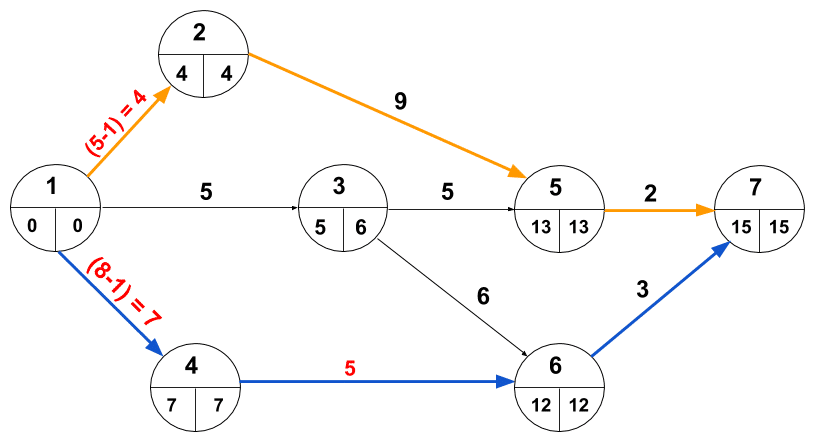 We can conclude that, by this is iteration-2 the Project cost increases than the last iteration-1.